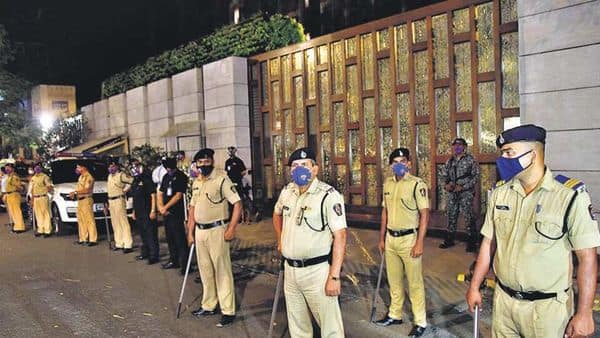 Police personnel stand guard outside Mukesh Ambani's residence Antilla after explosives were found in an abandoned car in its vicinity, in Mumbai (HT) 1 min read . Updated: 26 Feb 2021, 04:15 PM IST Edited By Aparna Banerjea 'We are thankful to Mumbai Police for their quick and immediate action,' stated Reliance Industries in a statementMumbai Police had deployed its personnel outside Ambani's house after explosive materials were found near his residence

Mukesh Ambani-led Reliance Industries on Friday issued a statement after suspicious explosive materials were found in a car parkenear his residence 'Antilia' a day before.

A suspicious vehicle with gelatin, an explosive material, inside was found parked near Ambani's house in Mumbai on Thursday evening, police said.

The vehicle was found on Carmichael Road near `Antilia', Ambani's residence, a police official said.

It was not an assembled explosive device, he said, adding that further investigation was on.

Maharashtra home minister Anil Deshmukh told newschannels that the vehicle, a Scorpio van, was found some distance away from the multi-storey residence of Ambani, the chairman of Reliance Industries.

Earlier today, an FIR was registered in connection with the seizure of a vehicle, which had explosive material inside it, police said.

The registration number on the vehicle's number plate was the same as that of an SUV in Ambani's security detail, police had said.

A letter was also found inside the car, the spokesperson said, without revealing its contents.

Mumbai Police had deployed its personnel outside Ambani's house after explosive materials were found near his residence on Thursday.

"Police deploy police personnel across the city and are conducting searches. The vehicle has been seized for investigation," Mumbai Police said yesterday.