Fact Check: Five-year-old picture of unrest passed off as recent clashes in Srinagar

A picture of masked youths pelting stones started circulating on social media with the claim that clashes erupted at Srinagar’s Batmaloo area during a cordon and search operation (CASO) recently. India Today's AFWA probes the truth.

Two policemen were killed in Srinagar recently after a terrorist fired at them from close range. Following the attack, security forces launched an operation to nab the assailant.

Soon after the incident, a picture of masked youths pelting stones started circulating on social media with the claim that clashes erupted at Srinagar’s Batmaloo area during a cordon and search operation (CASO).

The caption along with the picture says, “FLASH. Massive Clashes Erupted During Ongoing CASO In Batmaloo Srinagar.”

India Today Anti Fake News War Room (AFWA) has found the claim to be misleading. The picture was taken in Batmaloo during violent protests in July 2016. Though search operations are going on in Srinagar, no massive clashes have been reported till the filing of this story.

Many Facebook users have also posted this picture with the same caption. The archived version can be seen here.

Using TinEye reverse search, we found the picture in circulation on the website of “Getty Images”. Here, the caption says that the picture was taken on July 28, 2016, when protesters in Srinagar’s Batmaloo area clashed with security forces after Kashmiri terrorist Burhan Wani was killed in a gunfight.

A similar picture from the same date can also be seen on “Getty Images”. The pictures were clicked by AFP photographer Tauseed Mustafa. Burhan Wani was killed on July 8, 2016, following which the Valley faced its worst unrest since 2011, with at least 49 people killed and over 3,000 injured in clashes.

Moreover, we could not find any recent media report saying that clashes erupted during search operations in Srinagar. India Today correspondents in Kashmir have also confirmed to us that as of now, clashes have not been reported during ongoing CASOs. 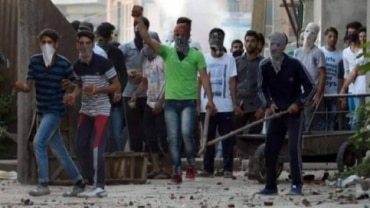 ClaimRecent visual from Batmaloo area in Srinagar where clashes erupted during a cordon and search operations by security forces.ConclusionThe picture was taken in Batmaloo during violent protests in July 2016, following the death of Kashmiri terrorist Burhan Wani in a gunfight with security forces.

The number of crows determines the intensity of the lie.