Prime Minister Narendra Modi turned 71 on September 17, and many congratulatory messages poured in for him on social media. Several netizens shared a postal stamp featuring the prime minister with claims that the Turkish government issued it in his honour.

Apart from the image of PM Modi, the stamp also bears an image of the Indian national flag. “Narendra Modi Prime Minister of the Republic of India” is written at the bottom of the stamp.

India Today Anti Fake News War Room (AFWA) has found that the claim along with the image is misleading. The Turkish government had issued a postage stamp in 2015 as part of a commemorative series for all leaders who attended the G20 Antalya Summit in Turkey that year. The stamp was not an exclusive gesture for PM Modi.

The archived versions of similar posts can be seen here and here.

With the help of a keyword search, we found that the stamp was issued in 2015 by Turkey, but not exclusively for PM Modi.

According to a report by Business Today, published on November 19, 2015, the stamp was issued by Turkey in “remembrance” of that year’s G20 Antalya Summit.

The image of this special edition stamp collection was tweeted by the official handle of G20 Turkey on November 18, 2015. The stamps were distributed to all leaders by Turkish President Recep Tayyip Erdogan, the tweet mentioned.

President Erdoan presented a special edition stamp collection of all the leaders attending the #G20AntalyaSummit https://t.co/3LHjkJHIGs

An official statement about the special edition stamp collection on the site G20 Turkey can be seen below.

As per the reports , other world leaders who were presented the stamps include, then US President Barack Obama, Russian President Vladimir Putin, Chinese President Xi Jinping, then UK PM David Cameroon, then Australian PM Malcolm Turnbull, then Brazilian President Dilma Roussef, Canadian PM Justin Trudeau, German Chancellor Angela Merkel, then Japanese PM Shinzo Abe, and then European Council President Donald Tusk. François Hollande, who had to cancel his visit due to the Paris killings, also received the stamp.

A similar claim was earlier fact-checked by SM Hoax Slayer in 2016.

It is, hence, clear that though a stamp was issued in honour of PM Modi, it was issued by the Turkish government in 2015 for all the leaders who participated in the G20 Antalya Summit that year. 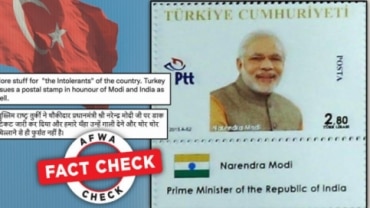 The number of crows determines the intensity of the lie.

'Radhe Shyam' director does not rule out postponement due to Covid

It's snowing at these places!