Govt can never dare to form laws harming farmers in a democracy: Tomar 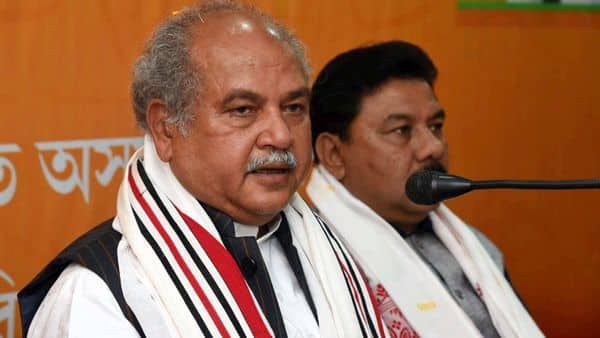 Tomar on Thursday iterated that the government is ready to resume talks with the protesting farmers, given that the unions respond to its offer to put the three contentious farm laws on hold for 18 months and set up a joint committee to find solutions

Amit the ongoing farmers' protest, Union Agriculture Minister Narendra Singh Tomar has said that the central government can never make laws that will be harmful to agrarians.

"In a democracy, a government can never dare to make such a law that will harm farmers," Tomar said at Pusa Krishi Vigyan Mela 2021 in Delhi on Thursday.

"I call upon the farmers of the country to explore the advantages of this new agricultural research along with government schemes, make agricultural sector atmanirbhar and make our country atmanirbhar," he added.

This comes as farmer leader Rakesh Tikait had on Tuesday announced plans for marching to the Parliament with 40 lakh tractors in order to intensify pressure on the central government to withdraw the three farm laws.

Tomar on Thursday iterated that the government is ready to resume talks with the protesting farmers, given that the unions respond to its offer to put the three contentious farm laws on hold for 18 months and set up a joint committee to find solutions.

The government and unions have held 11 rounds of talks, the last being on 22 January, to break the deadlock and end the farmers' protest, but to no avail.

"The government is fully sensitive towards farmers. We have held several rounds of talks (with unions). We proposed many amendments as well as keeping the farm reform Acts on hold for 1.5 years and setting up a joint panel to find solutions. But, they have not responded to our proposals," Tomar said.

Since 26 November last year, farmers have been protesting on the different borders of the national capital, against the three newly enacted farm laws: Farmers' Produce Trade and Commerce (Promotion and Facilitation) Act, 2020; the Farmers Empowerment and Protection) Agreement on Price Assurance and farm Services Act 2020 and the Essential Commodities (Amendment) Act, 2020.

The Samyukta Kisan Morcha (SKM), spearheading anti-farm laws protests at Delhi borders, appealed to farmers on Thursday to peacefully participate in a 'Bharat Bandh' called by transport and trade unions on Friday.

The Morcha, in a statement, said it supports the 'Bharat Bandh' called by transport and trade unions.

"We appeal to all farmers in the country to support all the 'Bharat Bandh' protesters peacefully and make the Bandh a success," it said.

Traders' body CAIT has said that all commercial markets across the country will remain closed on 26 February in view of its 'Bharat Bandh' call demanding a review of the provisions of the goods and services tax (GST) regime.