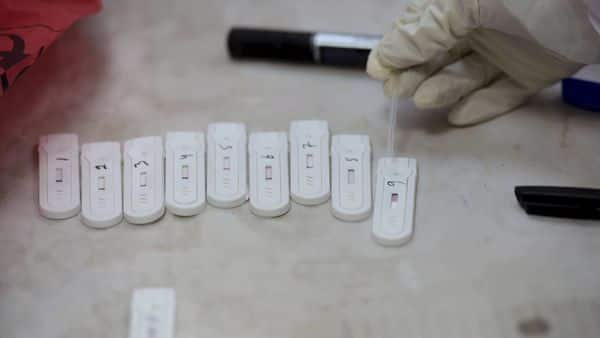 The Covid-19 death toll in Haryana rose to 3,047 on Saturday with three more fatalities, while 199 new cases pushed the infection count to 2,70,610

The residents were tested after three people were found infected with the coronavirus.

"First, three cases were reported, after which testing camp was set up. Around 20 persons tested positive. So, we declared it as a containment zone. More tests are being conducted," said J Prakash, an official from the health department.

The Covid-19 death toll in Haryana rose to 3,047 on Saturday with three more fatalities, while 199 new cases pushed the infection count to 2,70,610, a health department bulletin said.

One fatality each was recorded in Gurgaon, Ambala and Karnal districts, it said.

During the past 24 hours, the count of new cases doubled in Gurgaon, from 29 a day earlier to 62 on Saturday, while Karnal, Kurukshetra and Panchkula reported 33, 29 and 20 new cases respectively.

With an upsurge in Covid-19 cases being witnessed across the country, several apartments in Mumbai and Bengaluru have also been declared containment zones or sealed

An alert was sounded in an apartment in Bengaluru last week after ten people were found Covid-19 positive. Prior to that, 103 people at an apartment complex in the city were tested positive for coronavirus.

According to BBMP (Bruhat Bengaluru Mahanagara Palike) Commissioner, they had organised a program at the apartment and tested positive in the Covid-19 test they underwent later. Most of those who tested positive are below the age of 60.

In Mumbai, the Brihanmumbai Municipal Corporation (BMC) has sealed 127 buildings. The BMC had said that any residential buildings with over five active cases of coronavirus would be sealed.