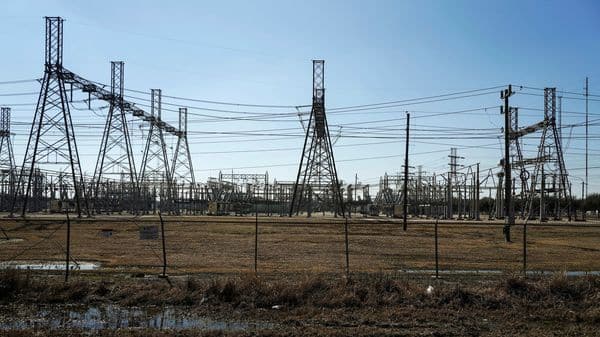 File Photo: Two public utilities told Texas lawmakers during hearings Friday that Ercot owed them money for power they produced during the crisis (REUTERS) 3 min read . Updated: 27 Feb 2021, 05:48 PM IST Bloomberg Ercot said it’s still waiting on more than $2 bn in payments from retail power providers and othersAs the real-time price of electricity was set at $9,000-a-megawatt-hour for several days during the grid emergency, the cost of ancillary services skyrocketed, costing some companies tens of millions of dollars

Texas’s grid operator needs to come up with $1.3 billion to pay power plants for energy they supplied during last week’s historic blackouts, raising the prospect it may require a state bailout.

The Electric Reliability Council of Texas, which manages most of the state’s grid, said it’s still waiting on more than $2 billion in payments from retail power providers and others after a deep winter freeze caused energy prices to skyrocket. The grid operator, known as Ercot, managed to cover part of that debt by transferring $800 million in revenues from another market but remains $1.3 billion short, according to a notice.

If Ercot can’t come up with the rest, the debt could end being shared by everyone in the market -- even consumers. That may prompt lawmakers to step in and make up the difference, said Evan Caron, chief strategy officer of energy technology firm ClearTrace and a former Ercot trader.

“Someone is going to need to pay," Caron said in an interview. “I’ve never seen anything like this before."

Ercot did not immediately respond to an inquiry into whether it plans to ask for a state bailout.

The shortfall comes after this month’s Arctic blast knocked nearly half of the state’s power generating capacity offline, causing electricity prices to jump to $9,000 a megawatt-hour and leaving some buyers unable to pay. The crisis plunged more than 4 million homes and businesses into darkness for days. Dozens died in the cold.

“In the past I have only seen a million-dollar shortfall -- so a billion dollar one is not even in the ballpark," Sinn said.

In addition to managing the grid, Ercot is a middleman for transactions between power plant owners and retail energy providers that buy their electricity. Under typical conditions, those transactions are settled every day. But the organization warned Wednesday that several retailers were in “payment breach" and that more could default. As a result, some generators haven’t been paid in full.

“If there are massive bankruptcies among utilities, then there might be a need for a state intervention of some sort, like a bailout," said Michael Webber, a professor at the University of Texas at Austin who serves as chief science and technology officer at French utility Engie SA. “The total tally will certainly be higher than $2 billion, and no one knows what the ultimate consequences will be because this is new territory for us."

Two public utilities told Texas lawmakers during hearings Friday that Ercot owed them money for power they produced during the crisis.

“We are concerned that because of potential bankruptcy of retail providers we will not be paid," said Terry Naulty, assistant general manager of Denton Municipal Electric.

Because the real-time price of electricity was set at $9,000-a-megawatt-hour for several days during the grid emergency, the cost of ancillary services skyrocketed, costing some companies tens of millions of dollars. Some retailers have asked the Public Utility Commission of Texas to waive their obligation to pay those charges while their challenges are ongoing.

Freepoint Commodities LLC has also appealed to the commission, saying they intend to challenge Ercot’s ancillary service charges and are concerned the grid operator lacks the liquidity to return any successfully disputed payments.

On Friday, the grid operator announced it would cover part of the shortfall with $800 million in congestion revenues, money generated from trading bottlenecks on the grid that is supposed to be returned to consumers. Using congestion revenues will likely hit retailer margins, according to Caron.

“They are going to have to figure out how to recoup those margins and if they are still alive and standing after this, anticipate the fixed-rate price contracts to go up for customers," he said.