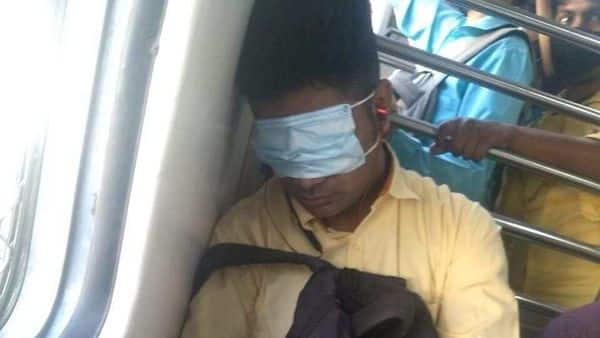 The latest instance of jugaad has upset Chairman of Mahindra Group, Anand Mahindra. 2 min read . Updated: 26 Feb 2021, 04:22 PM IST Meghna Sen The picture shared by industrialist Mahindra shows a young man sleeping on a train. The mask that he is wearing to prevent himself from the killer virus is covering his eyes instead of his nose and mouth

Business tycoon Anand Mahindra's latest post on Twitter proves that Indians are the champions of 'jugaad'. The Hindi word, pronounced jew-GAAR, which roughly translates to a clever hack or a quick fix, has long been used to denote the Indian spirit of resourcefulness and enterprise.

The concept of 'jugaad' represented a way for the people of the country to access modern conveniences on the cheap, which the industrialist has always praised.

However, the latest instance of 'jugaad' has upset the Chairman of Mahindra Group.

The picture shared by the 65-year-old shows a young man sleeping on a train. The mask that he is wearing to prevent himself from the killer virus is covering his eyes instead of his nose and mouth.

Mahindra took to Twitter to share the picture with the caption: "When you start looking for reasons behind the recent rise in Covid cases in Mumbai...(This is one jugaad that doesn't deserve any applause.)."

When you start looking for reasons behind the recent rise in Covid cases in Mumbai...(This is one jugaad that doesn’t deserve any applause.) pic.twitter.com/3FbyNR7ClM

This is not the first time that Mahindra has amused his 8.3 million followers with such posts. His tweet has been retweeted 370 times (at the time of publishing the report) on the microblogging platform Twitter since being shared by the business tycoon and has tons of comments and likes.

Meanwhile, Mumbai has reported more than 1,100 coronavirus cases for the second day in a row on Thursday, taking the tally to 3,22,843, while five more patients succumbed to the disease, the city civic body said.

The financial capital reported 1,145 new cases of coronavirus slightly down from 1,167, the highest daily spike in about four months, on Wednesday, according to Brihanmumbai Municipal Corporation (BMC)'s updated data.

This was the second day in a row when the city recorded over 1,100 Covid-19 cases, keeping with the upward trend witnessed in the last two weeks.

The fresh cases pushed the caseload of Covid-19 infections in Mumbai to 3,22,843, while the death toll rose to 11,458 with the addition of five fatalities, the BMC said.

As per the BMC data, with 463 more Covid-19 patients recovering from the infection, the number of discharged persons jumped to 3,01,520, about 94% of the tally.

With the new infections being more than the recovered patients, the number of active cases increased to 8,997 from 8,320 a day before.