Government data shows 30-35% utilisation rates of the vaccines available with states, suggesting administrative issues in giving the vaccine and hesitancy among the eligible public to take it.

India gave 3 million doses of covid vaccines on 15 March, an increase of about 50% over the previous highest single-day figure recorded on 12 March. Even as vaccination numbers rise steadily, government data shows there’s enough supply of the vaccine to impart significantly more doses on a daily basis. Lower utilisation rates suggest administrative and logistical issues in giving the vaccine and hesitancy among the eligible public to take it.

The government released capacity utilization rate on a daily basis on its Co-WIN portal, before taking down this section on 17 March. Utilization was calculated as doses administered as a percentage of doses available. This data was being released on an all-India basis and for 10 states with the highest utilization. For the 7-day period to 15 March, the all-India average was 32%. Part of this was accounted for by wastage, which the government on 17 March said stood at 6.5% .

Among states in the top 10, Delhi was ranked fourth (utilization rate of 89%) and Maharashtra ninth (70%). Put another way, states that were ranked below 10 were registering a utilization rate of below 69%. That set included states such as Punjab and Gujarat, which are among those reporting the maximum new covid-19 cases and stoking fears of a second wave.

By 18 March, the total administered vaccine doses stood at 37.1 million. Thus, in 18 days of phase II, India had given 2.7 times the doses it gave in the 44-day phase I. The latest three-day average of daily doses stood at 2.4 million, against 0.78 million at the beginning of phase two. Phase II, which allowed people above 60 years of age to walk in for vaccination, has seen 10 million beneficiaries in that age bracket. According to latest government population projections, India had about 138 million people above the age of 60 years.

Adjusted for population, Kerala (53 doses per 1,000 population) has retained the top spot in vaccination. It is followed by Delhi (46.3), Rajasthan (45.5), and Gujarat (44.7). Kerala and Rajasthan recorded a 47% increase in this metric over the past week, Delhi 31%. Nationally, this figure has almost doubled in the last 12 days, and is now at 27.1. The full-vaccinated population (those who have completed two doses) now stands at 0.48%.

At a worldwide level, India has crossed the United Kingdom to occupy the third position in total doses administered, after the United States (110 million) and China (65 million), according to data portal Our World in Data. In terms of doses administered per 100 people, over the past week, India saw an increase from 1.8 to 2.7. Among major countries, Israel (109.8) leads the way, followed by UAE and Chile. 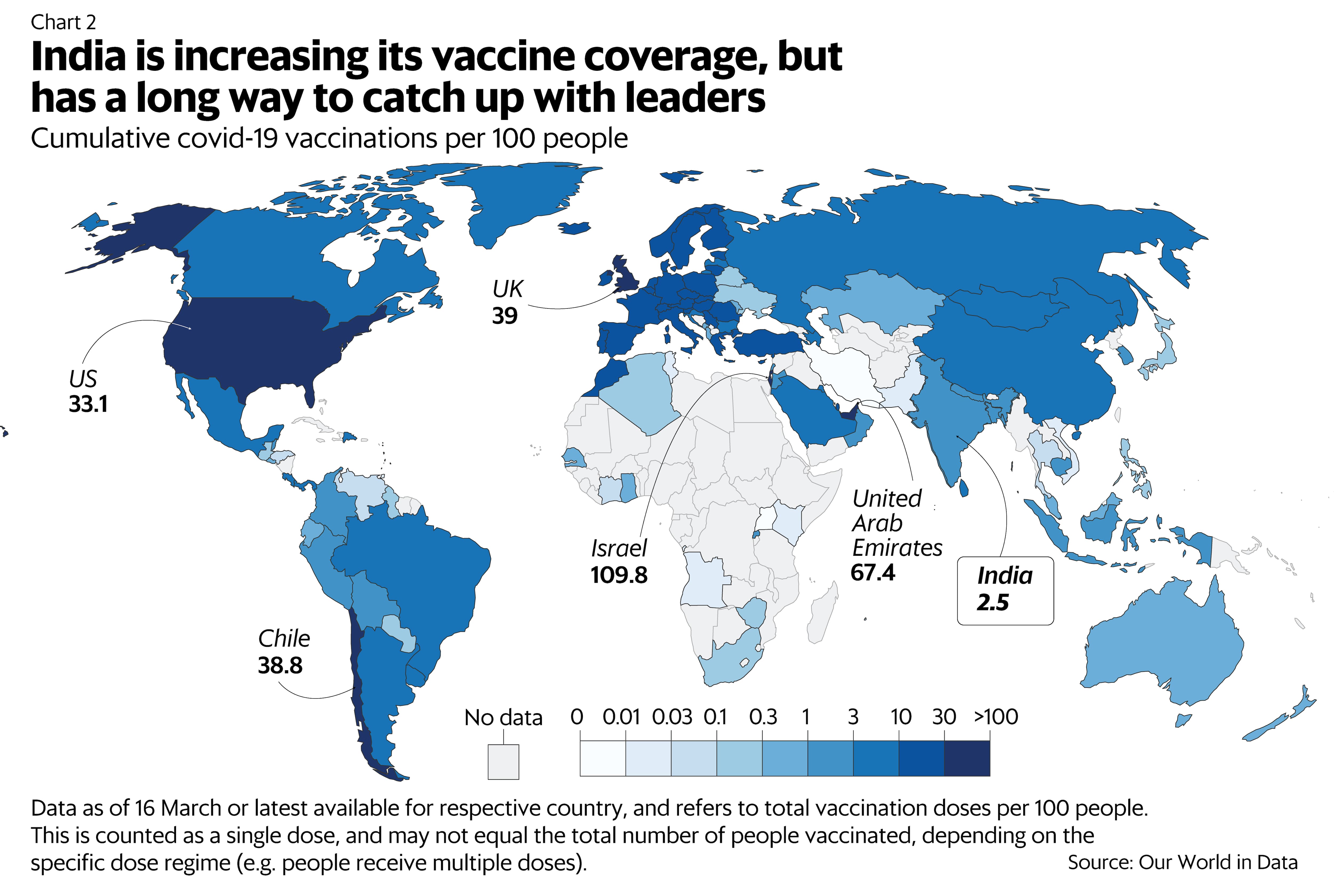 Source: Our World in Data

Meanwhile, fears of a second wave of coronavirus in India continue to rise. For the first time since the last week of December, the number of weekly confirmed cases crossed 150,000. As many as 28 states and union territories registered a week-on-week increase in cases. However, the virus has been less fatal this time around. On 17 March, the seven-day rolling death rate was 0.54%, which was lower than the 0.92% on 17 January but higher than the 0.42% on 17 February.

In the past week, 15 states had more than half their districts reporting a rise in cases. In Punjab, all districts have seen an increase in confirmed cases, with Hoshiarpur and Sahibzada Ajit Singh doubling. Similarly, in Gujarat, 23 of 33 districts reported a week-on-week increase. The state has imposed a night curfew in four districts that made up 75% of Gujarat’s new case load over the past week: Ahmedabad, Vadodara, Surat and Rajkot.

Although the number of Indians getting vaccinated is rising, the curve is not rising as steeply as it is in countries such as Israel, US or UAE. In a meeting with the Prime Minister on 17 March, there was a clamour from state chief ministers to lower the age bar (currently at 60 years) for the general public to get vaccinated. As and when it happens, it could shore up vaccine utilisation rates.

www.howindialives.com is a database and search engine for public data.